Christmas is a holiday celebrated in the whole Christian world, meaning that the beautiful and cozy traditions come with different variations according to the local cultures of each country.

If traveling is your lifestyle, then you will love our list of Christmas traditional desserts from our sailing destinations, which will both give you the right dose of sweetness to start your day (or end it, for what it's worth), and perhaps will also inspire you to bring some non-conventional traditions to your table during the holidays!

So buckle up and prepare your tastebuds, we're going on a culinary adventure! 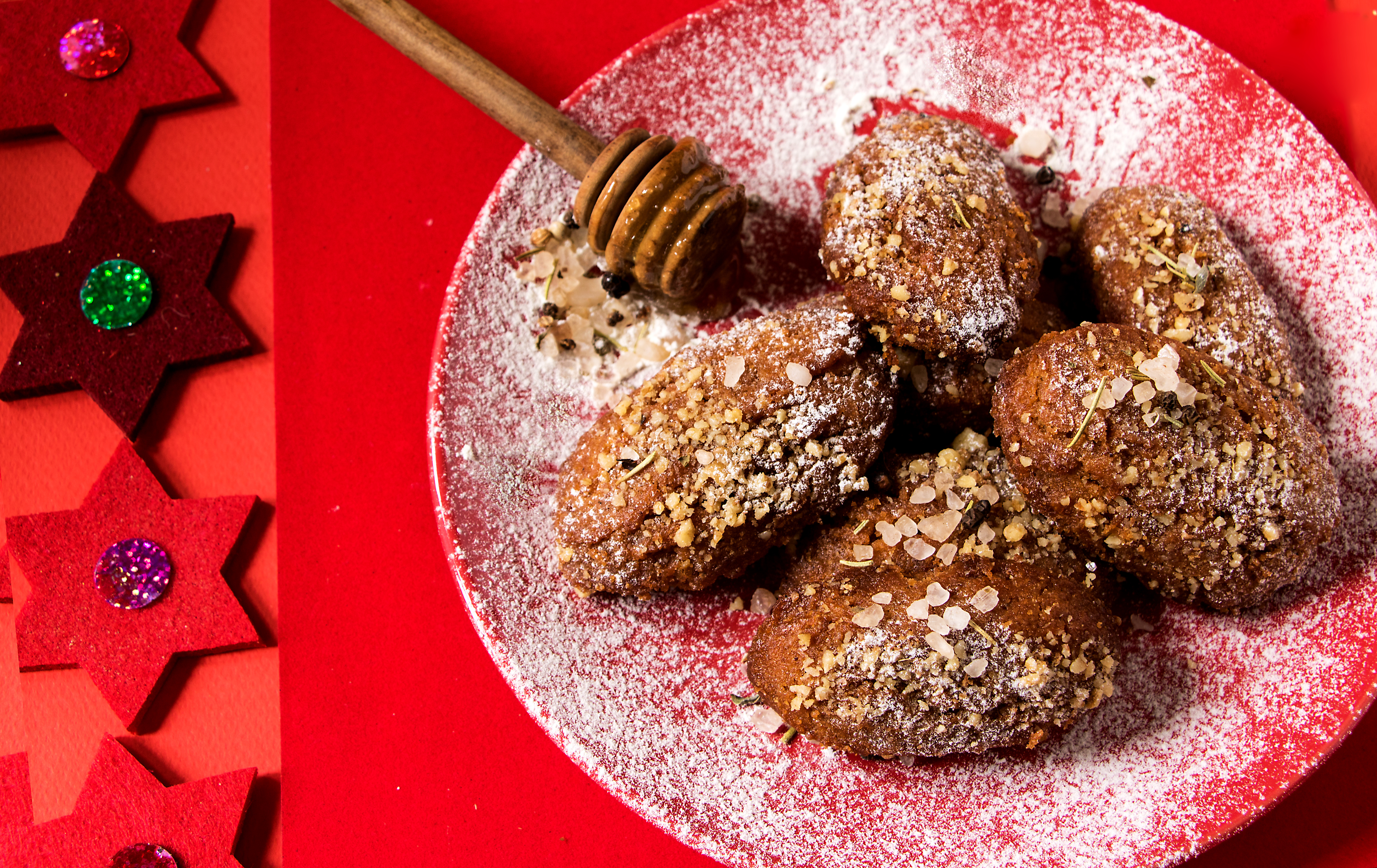 We start our journey in one of our top sailing destinations, Greece. Here, the festive spirit soaks up the entire country during Christmas, and traditional food is definitely the protagonist. Melomakarona are, in fact, honey cookies that mark the beginning of the Christmas season. They're made with a few, quality ingredients such as semolina, flour, orange zest, nutmeg, cloves, and cognac to add a unique flavor, and are usually topped with walnuts or cinnamon.

The word “melomakarona” is a combination of the words “meli”, which means honey, and “makarona”, which comes from the ancient word “makaria” and means blessed. They are naturally free from eggs and milk so they are also perfect for vegans. A real blessing for the tastebuds! 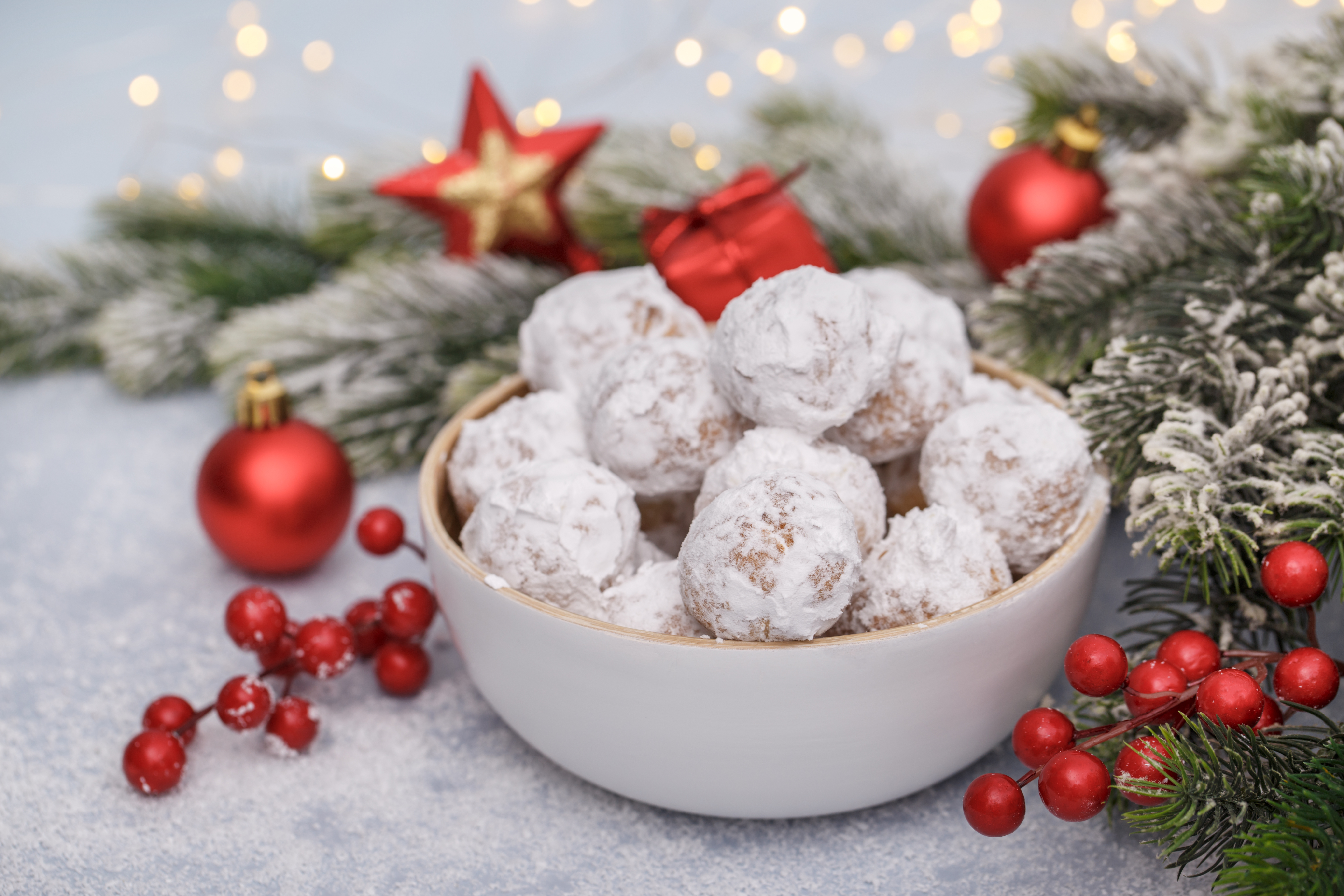 The Spanish culture has roots in different countries around the world, which for the most part share similar culinary traditions. A great example of this "shared" tradition is the Polvorones, which have different versions according to the country in which they are made. Originally invented in Spain, it is a crumbly shortbread made of flour, milk, nuts, and sugar, topped with a sprinkle of icing sugar that gives it a perfect "snowy" look!

The name derives from the Spanish word "polvo", which means dust. Once you try one of these cookies, you immediately understand what they are called so: they literally crumble in your mouth like dust! 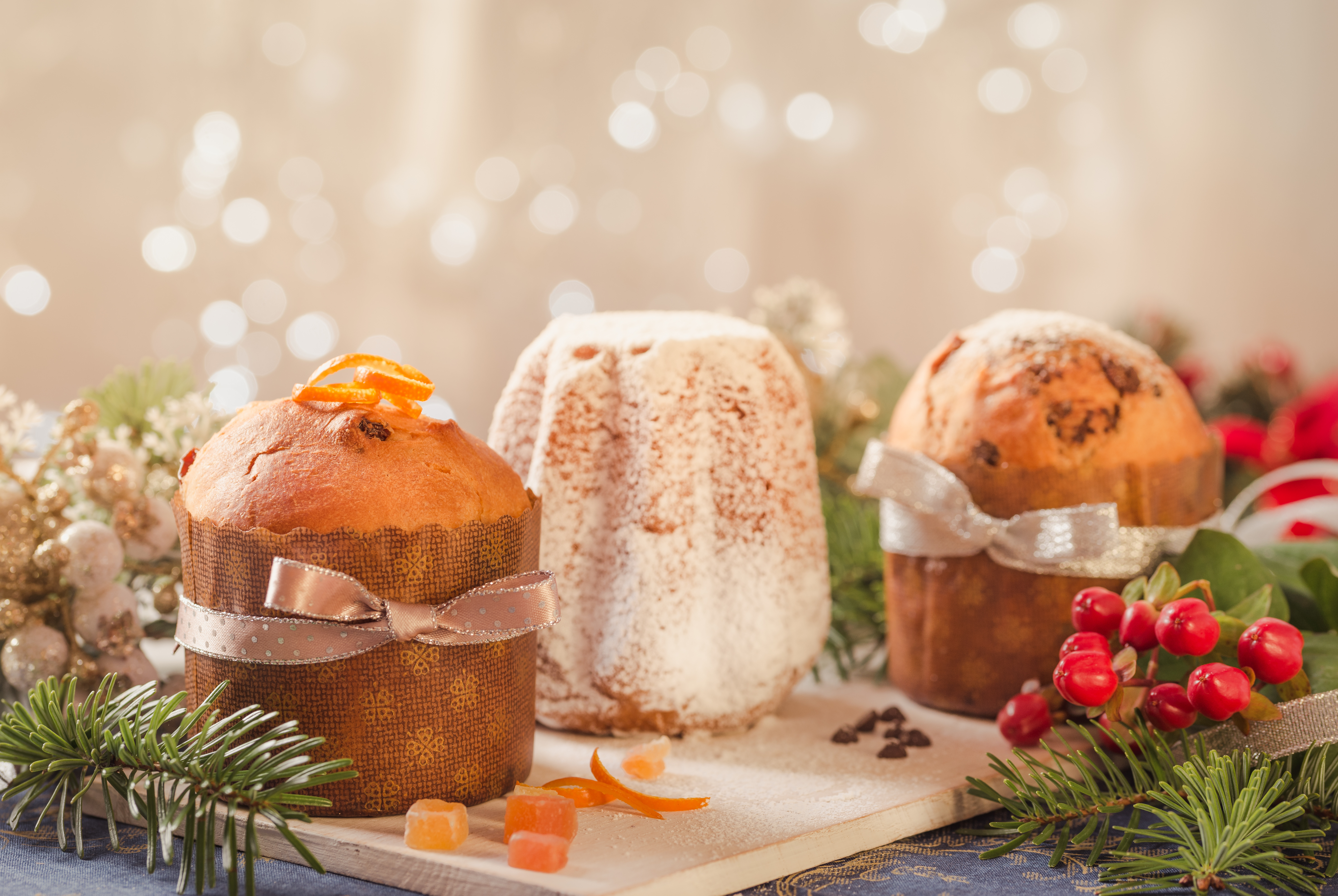 What's a culinary adventure without mentioning Italy? Respectively invented in the cities of Milan and Verona, Panettone and Pandoro are the true symbols of the Italian Christmas that cannot miss on the tables.

Panettone is a towering round of sweet bread dotted with dried fruit, raisins, and almonds, and topped with confetti sprinkles. The modern recipes also include different variations with creamy fillings, pistachios, spices, and more, but they're all equally delicious and heavenly-tasting.

Pandoro is a star-shaped sweet bread that is usually topped with icing sugar. Just like the Panettone, there are many versions that can satisfy any taste, but the original recipe goes for a plain and buttery bread that literally melts in your mouth. Pandoro is quite popular among children and those who are not particularly fond of dried fruits. 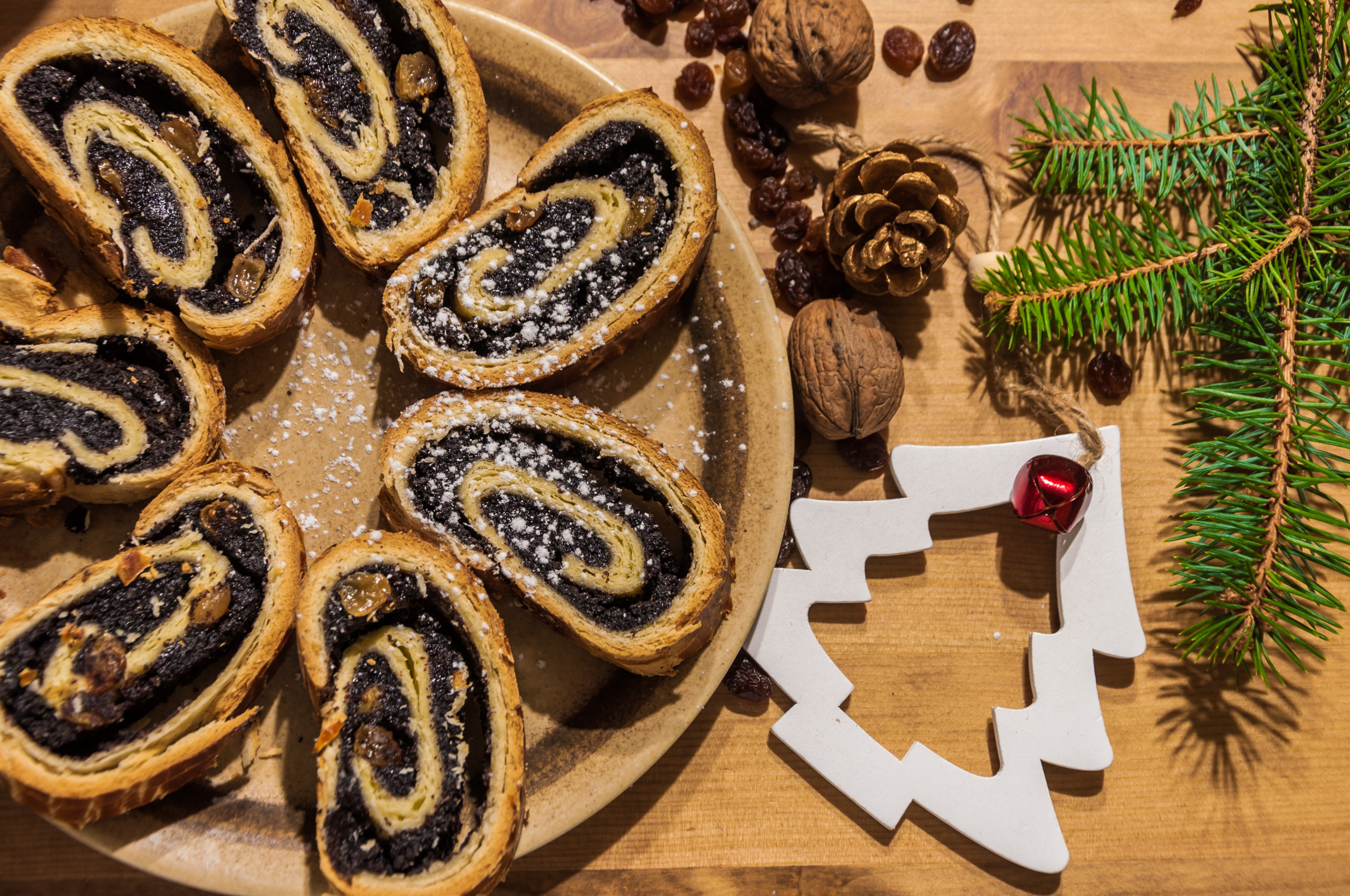 Culinary traditions are very strong in Mediterranean countries, and Croatia is no exception. Among many sweet and savory recipes that fill the tables, the Makovnjača is a dish you can hardly bypass during the festive season: this loaf of bread has a twirly inside and is usually gifted to other people in the kind spirit of good relations.

The dough is made of simple ingredients and the filling is a mixture of poppy seeds, milk, and sugar. Other variations include cocoa powder, jam, or nuts, but the original one is the poppy seed roll, which is mostly served on Christmas or Easter. Give a twist to your Christmas menu and try this tasty dessert! 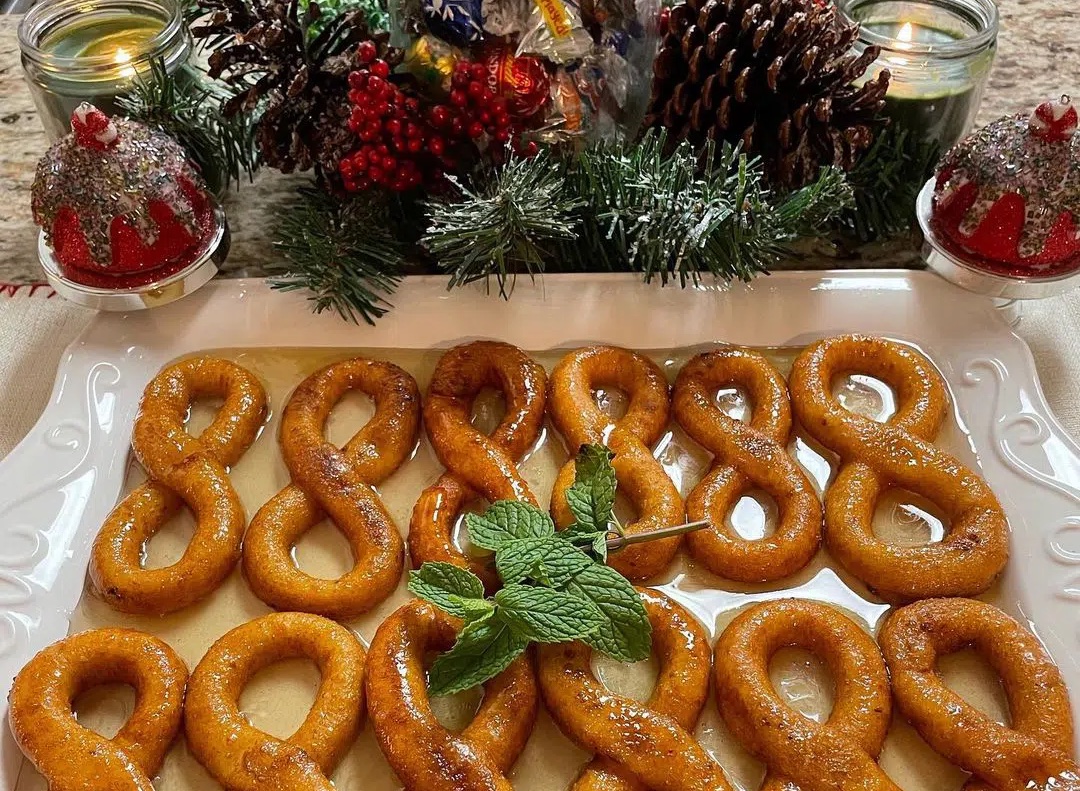 Despite their Spanish origins, the Cuban version of the buñuelos has been an important symbol of the Christmas season of this island, which also highlights the abundance of roots such as yuca or malanga in Cuba.

The dough of these pastries is made with the addition of the aforementioned roots to flour, eggs, and anise extract, then shaped in figure 8s, fried, and finally coated with a cinnamon-anise homemade syrup. A perfect dessert to enjoy after Christmas dinner or on New Year's Eve! 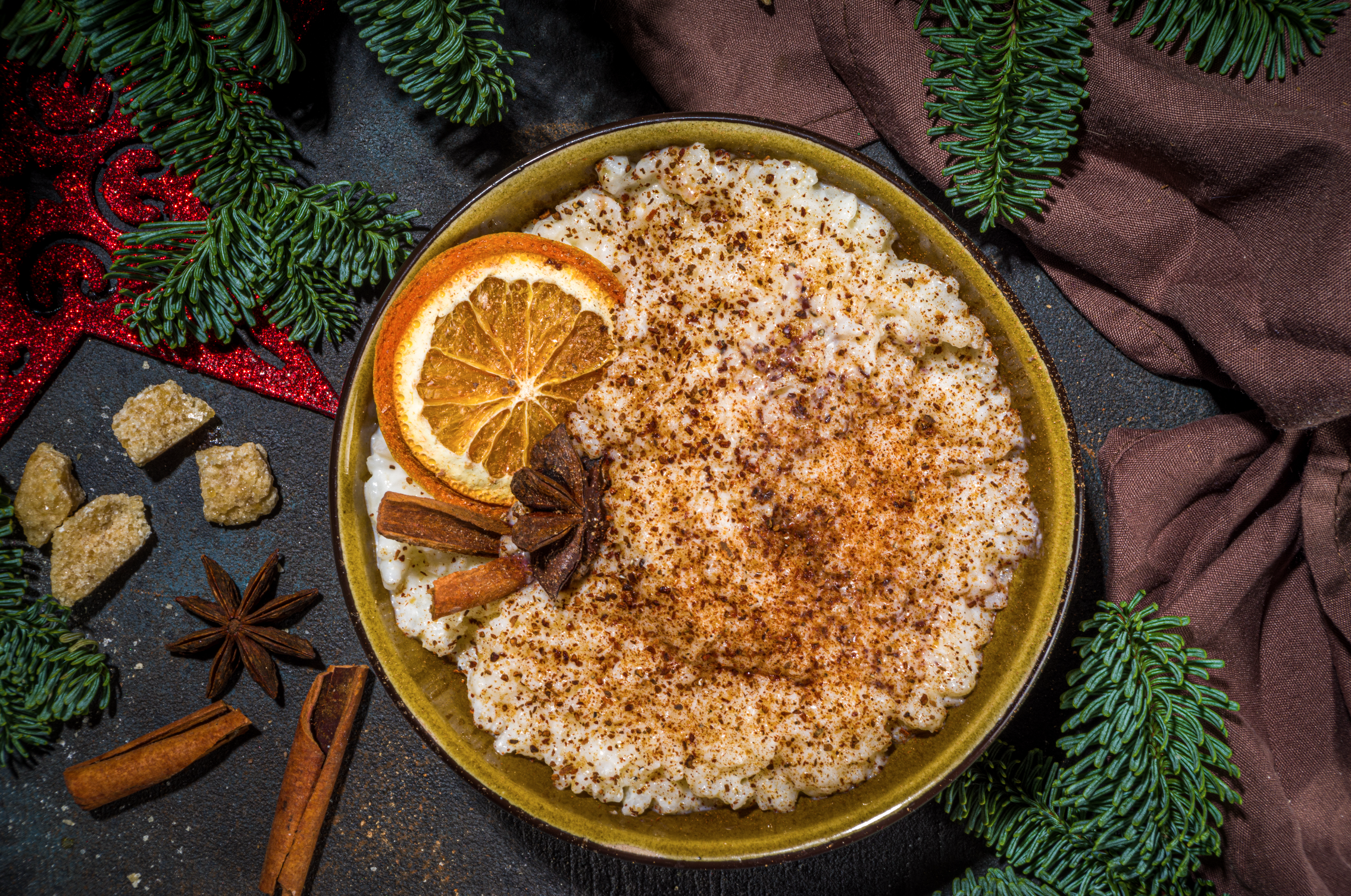 Arroz Doce is a thick and creamy Portuguese dessert typically served during Christmas time or at weddings. The name literally translates into "sweet rice" but it's better known as rice pudding, and it's very easy to make. All you have to do is to cook short-grain rice in a pot with water, cinnamon, and lemon peels, adding the egg yolks at the end to give it the typical yellowish look. It is usually topped with crossing lines of cinnamon powder, but you can add any spice you like!

Beware: this dessert is so creamy, you'll be eating it directly from the pan! 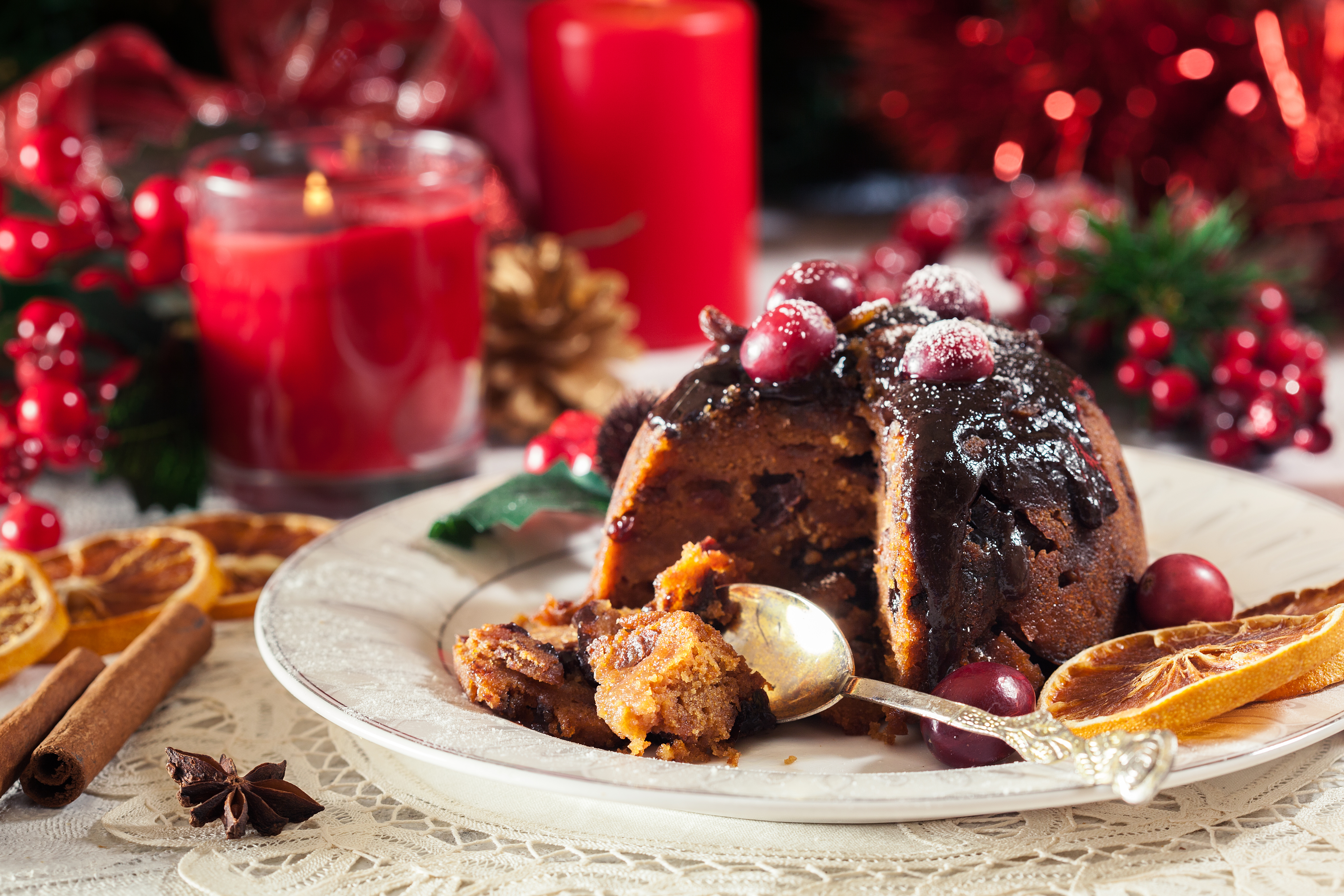 Speaking of puddings, it's time to talk about the number one Christmas dessert that is never missing from any English table. The Christmas Pudding is meant to be prepared at least 5 weeks before Christmas, traditionally on the last Sunday before advent, then stored in a cool, dry place and finally reheated on Christmas Day: this is because it needs enough time to mature its flavors and to maintain its shape.

Unlike the American pudding, the English version is a dark, stickier, and dense sponge similar to a fruitcake, made of mixed dried fruit, candied fruit peel, apple, and citrus zests. The flavor and color are also given by the use of brandy and spices. You can serve it with a brandy sauce or custard for extra delight! 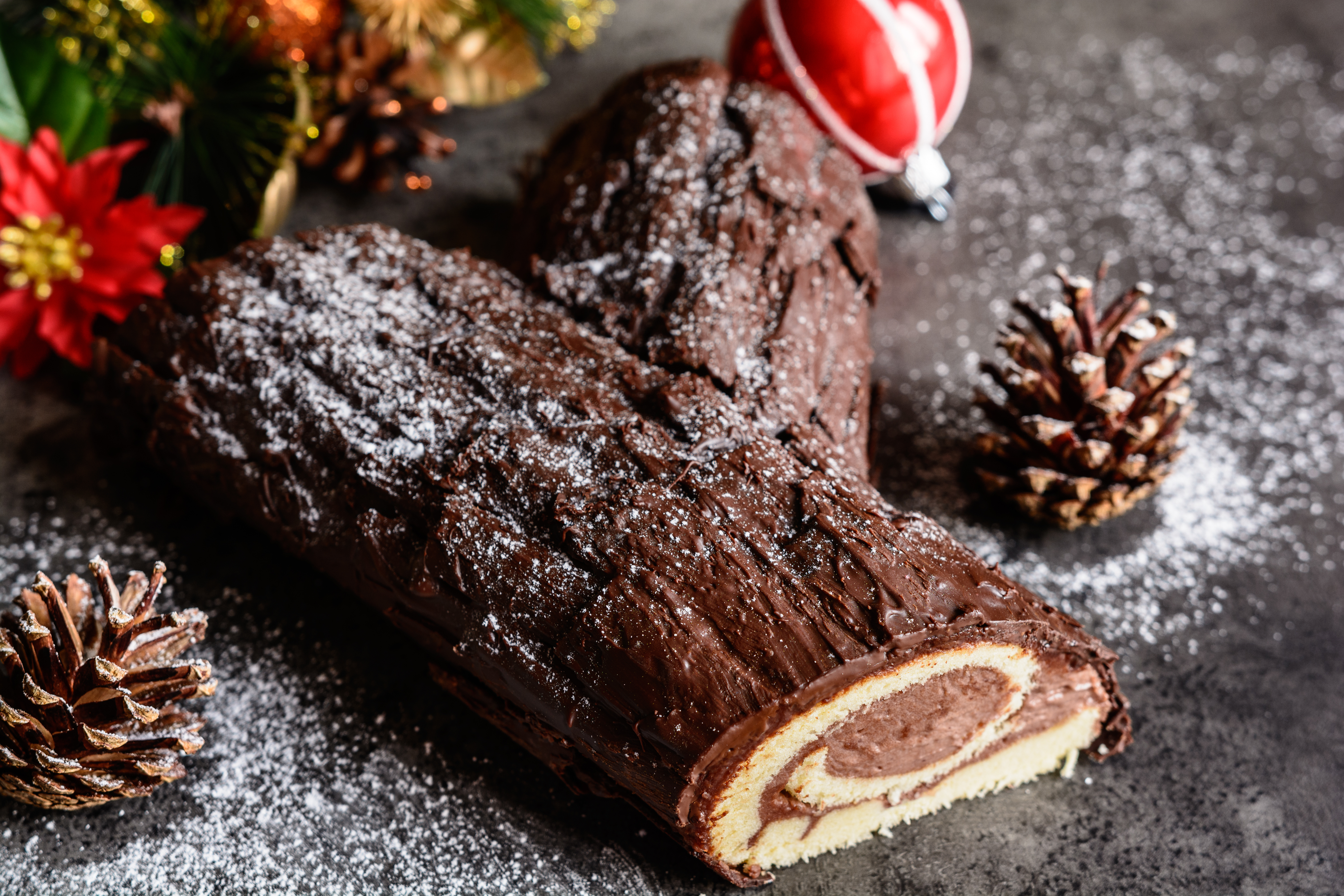 The French undoubtedly know how to impress: the Bûche de Noël is a tasty and stunning dessert that will certainly leave everyone speechless. If you're a skilled cook, then you might want to replicate this!

This Yule Log symbolizes the log traditionally burnt on Christmas Eve and is meant to bring good luck to the new year. It really has everything it needs to be a tasty dessert: cake batter, chocolate filling cream, chocolate ganache as a topping, and a sprinkle of icing sugar to emulate the snow. You can add as many details as you like to make it look like a proper log, such as the typical tree bark by dragging a fork into the ganache or using marshmallows to make tiny mushrooms.

Although it might look complex, there are many step-by-step recipes that are easy to follow: simply enjoy the festive process and be ready to impress your guests! 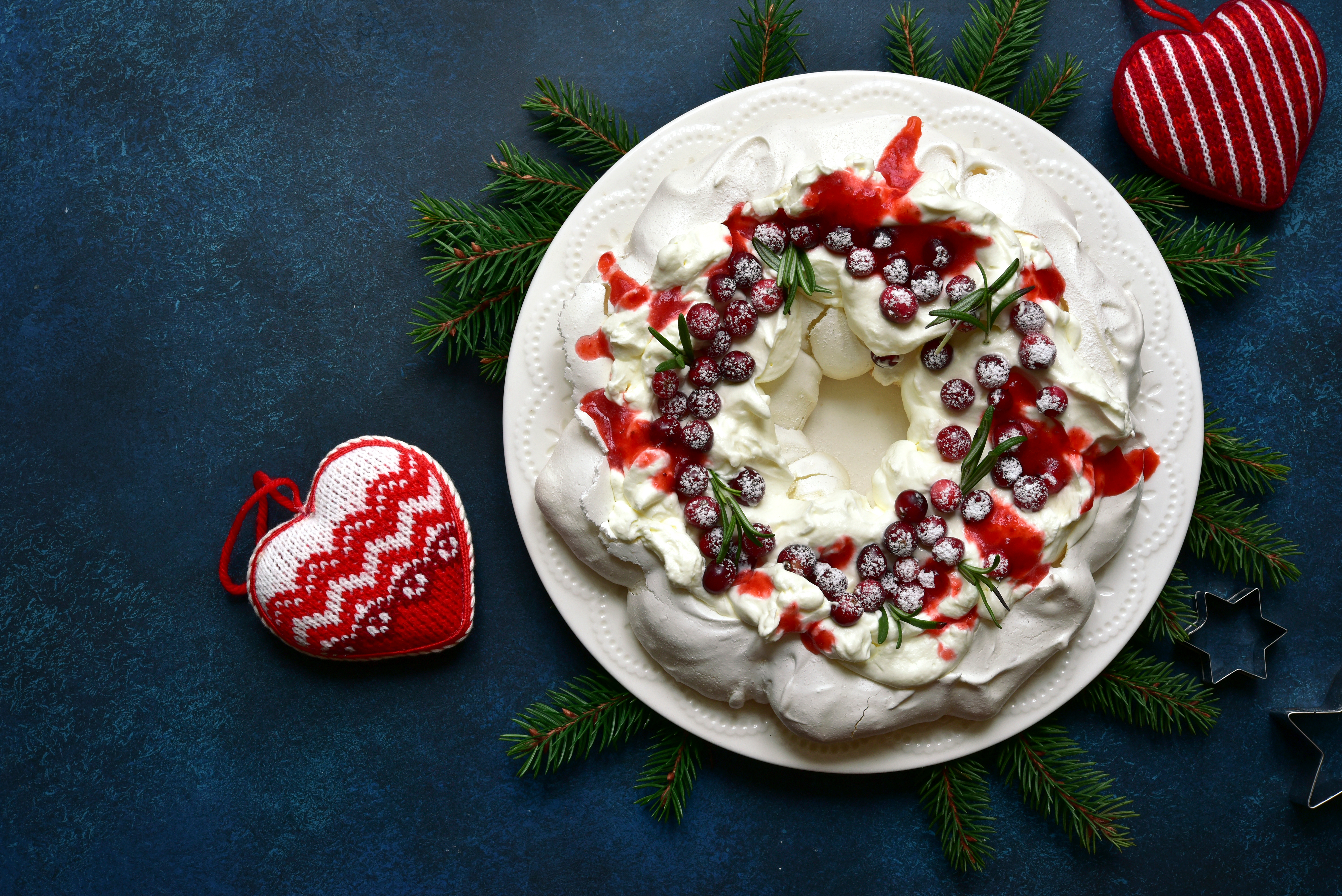 The Pavlova is an elegant meringue cake filled with whipped cream and fresh fruit, and it has Australian and New Zealand origins. This cake takes its name from the Russian ballerina Anna Pavlova, who was very famous in the 1920s for her elegance and talent.

Unlike the original meringue base, that of Pavlova is crispier on the outside and soft on the inside, a consistency that can be achieved only by following precise recipes and using the right doses of ingredients. The result is a frothy delight that will make your tastebuds explode!

The original fillings are whipped cream and seasonal fruit, such as kiwi, wild berries, or passion fruit for Australia and New Zealand, but you can make your own version using different seasonal fruit or chocolate and spice filling to give it a more "Christmassy" flavor! 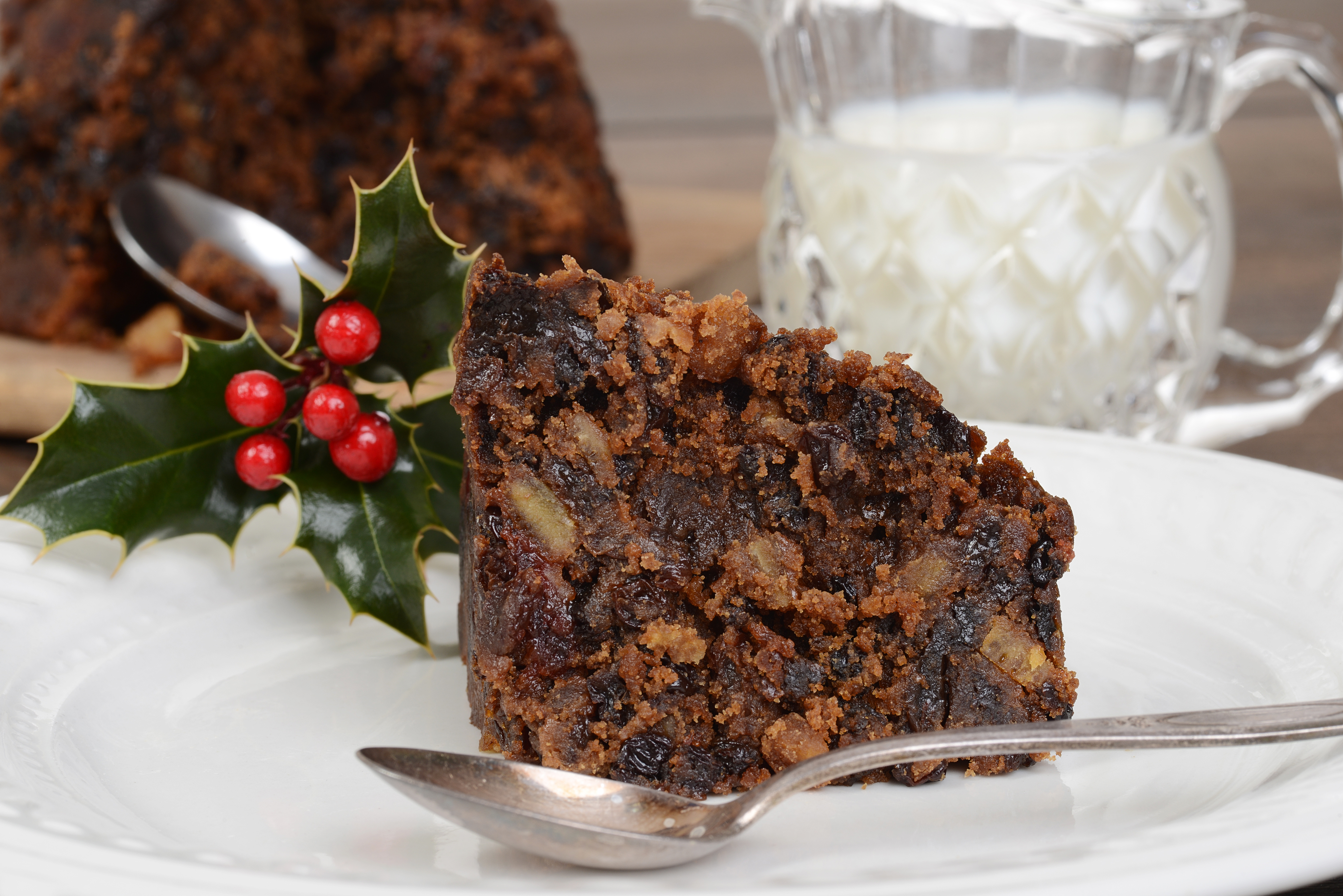 We end our list with a delicacy from the Caribbean: the Black Cake. Its unique dense texture and rich taste are what make this cake a real specialty, which it's definitely a must-try for the holiday season!

The main ingredient is dried fruits such as prunes, currants, raisins, and cherries, which is also what gives that typical dark color that resembles the one of a chocolate cake. The dried fruits are grind and then macerated in rum and wine several months before the preparation (but if you make it yourself, a day or a few hours will do the job). The final result is a thick paste that will need to be combined with flour, eggs, burnt sugar, and butter. After baking, the cake is topped with cherry brandy and rum topping for extra flavor!

The pudding-like texture and the spiced flavors will conquer your heart (and your stomach!).

Around the world, there are so many Christmas desserts that an article will never be enough to list them all. The point is that food is one of the best ways to dive deep into a country's culture because of the rich history they contain in each bite. We think that investigating the origin of a dish, not only will it enhance its flavors, but also will it allow us to understand more of the amazing traditions and histories of the world!

Will you try to make any of these desserts for your Christmas holidays?