The Island of Elba is a wonderful treasure trove of history, nature and culture in the heart of the Tyrrhenian Sea and just a few miles from the Tuscan coast. At the centre of myths and legends since the times of ancient Greece, the island has always been a strategic point due to its position and the rich mineral deposits in its subsoil. Almost everyone knows that Napoleon spent his exile days here after his defeat at the Battle of Leipzig. However, far fewer people know about the more picturesque beaches along the island's rocky coastline. In this article, we'll define a list (however difficult it may be to pick!) of the shores one should not miss on Elba. We're talking here of those where you can go swimming, perhaps sheltered from the wind and where it is also safe to anchor. A sailor, born and bred here, will help us in this journey. Meet Leonardo, base manager in Marina Cala de' Medici harbour.

"Elba is very green and abundant with water. The wealth of its vegetation is even more evident when you arrive from the sea. Equally exceptional is the morphology of its rocks, which make it very colourful scenery. A wonderful view that, when seen from the sea, is even more fascinating." Top shores not to miss in Elba

Calanova beach is located on the eastern side of the island of Elba between the beaches of Malpasso and Istia.

It is a quiet oasis of about 80 metres, surrounded by lush vegetation and by maritime pines and cork trees that grow right down to the beach. Since it is not easy to reach by land, it remains less frequented, making it perfect for a relaxing break. There is also a small jetty.  Exposed mainly to winds from the north, north-east and east, the water is always crystal clear and from here you have a fantastic view of both the coast of Porto Azzurro and the back of Forte Focardo, high up on the rugged eastern side of Elba.

"Porto Azzurro remains sufficiently wide and protected from easterly winds, with an enchanting view of the iron-red rocky mountains above the town," Leonardo reveals.

Probably the most characteristic, this shore is located near Pomonte, on the south-western side of the island. As the name suggests, the crystal-clear waters of the beach are home to the wreck of the Elviscot, a merchant ship that sank in the 1970s and now lies at a depth of just ten metres. Shipwreck and home of the underwater fauna

Given the clarity of the water, it is clearly visible even from the surface and can be easily dived for free diving as well as with tanks. Now home to all the local fish, it offers a unique spectacle that is perfect for snorkelling and diving.

Since it is exposed to the winds, the beach of the Relitto guarantees windsurfers beautiful surfing in the open sea.

Perhaps one of the most famous on Elba, thanks to its crystal clear sea and unique microclimate. Since it faces south, and Monte Capanne protects the bay from the north winds, it always has a mild climate, which means you can get a good tan and go swimming even in the low season. It is located in an inlet surrounded by typical Mediterranean scrub and rows of cliffs; all this combined with a shallow sea bed makes the water particularly crystal clear. 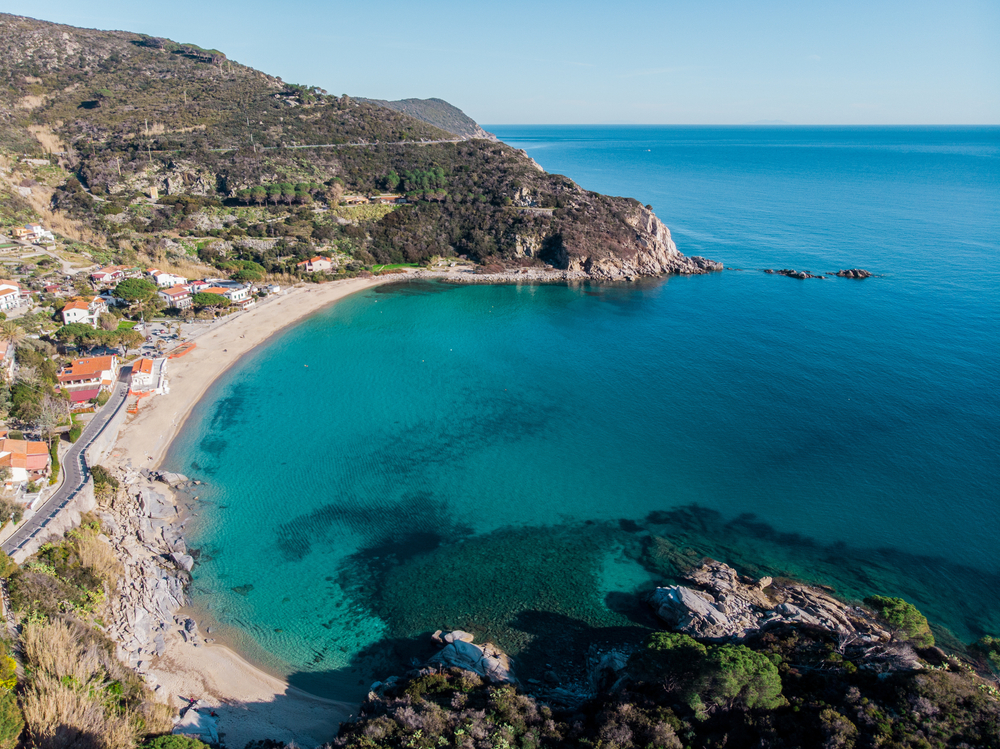 Who wouldn't want to take a dive here?

It is advisable to head west if you are looking for peace and quiet away from the bathing establishments. For those looking for beach parties and live music, the easternmost part of the beach is ideal, especially in July and August.

Since it faces south and Monte Capanne protects the bay from the north winds, it always has a mild climate, which means you can get a good tan and go swimming even in low season.

Arriving from Portoferraio, halfway along the road to Procchio (in the area called Capannone), one of the most enchanting and well-known bays on Elba is definitely worth a visit: it is Biodola. The beach takes its name from the reed that grew along the dunes in the area. "It's a perfect bay for a boat stop, away from the villages," Leonardo tells us. Perfect bay to anchor for some chilling time

The beach is formed by a natural amphitheatre made up of the surrounding hills of Serone delle Cime, Capannone and Colle Pecorara, all covered by a coppice of Mediterranean scrub which, together with Mount Perone and Mount Capanne (1019 m) in the background, stand out against the sea.

It is exposed to north-westerly winds but sheltered from southerly ones.

Right in the heart of Elba's nature, the Biodola beach can be described as a picture of absolute beauty: six hundred metres of fine, golden sand and Mediterranean scrub running down to the beach. It is possible to go water skiing, scuba diving and surfing.

Compared to Lacona beach, its older sister, Laconella beach is less crowded and is located in a natural, unspoilt setting. It opens out on the right-hand side of the Gulf of Lacona to the south of the Island of Elba and is characterised by the spectacular V-shaped cliffs of Punta Contessa that jut out into the sea. The crystal-clear aquamarine water here makes this bay ideal for snorkelling enthusiasts, particularly between the cliffs of Punta Contessa where a tiny, fine-grained beach opens out. Located in the north-east of the island, this beach is famous for its underwater life and its grey-blue pebbles. Legend has it that Jason's Argonauts made them this way: they used them during their search for the Golden Fleece to dry their sweat, leaving them as coloured as we see them today. A lighting system also makes night swimming possible, a magical experience that is definitely worthwhile for those who love night diving. 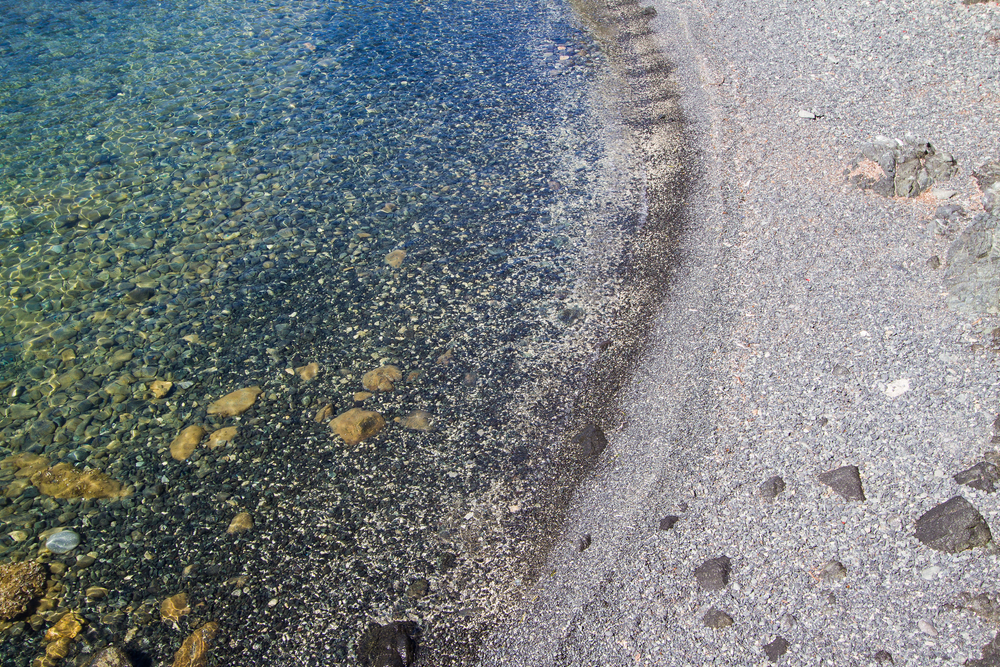 Quite the massage treatment you need for your feet

The ideal place for a picture postcard. In addition to the crystal-clear waters, white sandy beach and stony seabed, it is here that you can admire the most spectacular sunsets on the island: the sun plunges into the clear sea framed by the white cliffs that descend to the line of the waves. Sheltered by high, steep cliffs behind it, Capo Bianco is the perfect beach when the Scirocco wind blows because the sea is still calm and crystal clear. It is located in the Capoliveri area, on the southern side of the Island of Elba and is a paradise for lovers of unspoilt nature. The characteristic of the Felciaio beach is a series of rocks transported several years ago that has created a kind of swimming pool that is very suggestive and perfectly inserted in the natural context. The absence of any kind of establishment and the natural pool formed by the cliffs on the right-hand side is the perfect setting for enjoying the view of the Island of Montecristo.

We hope that our classification has given you some ideas for your trip and will accompany you on your next boat trip along the Archipelago. You will discover the Archipelago with its seven pearls, from the Island of Elba, the Island of Giglio, to Capraia, Montecristo, Pianosa, Giannutri and Gorgona. Good wind and see you next time!

Onboard a Beneteau Oceanis 51.1

What's the difference between a sailboat and a catamaran?

Atlantic Crossing. Are you Ready?