The area of Central Croatia represents, not only geographically, but also in all aspects, the true heart of the country. A fascinating region that is all too often forgotten: here, Croatia shows itself in all its beauty. Not to be missed is a stop at the two most famous cities that you will find along your route of navigation: Split, which preserves treasures of inestimable value as the Palace of Diocletian, inscribed in the list of protected assets by UNESCO and Trogir, the Venetian pearl.

The panorama of islands along your route by boat will allow you to discover the most beautiful beaches reachable only by sea and the thousands of coves where you can drop anchor.  And if the reasons for visiting central Croatia are still not enough for you, just think of its good food: on the table of the taverns that you will find along your route, there will be absolutely no lack of fresh cheeses, salami and wines.

Perched on a small peninsula, Split is considered one of the most beautiful places in Croatia. It is certainly worth a stop to visit the beautiful Diocletian's Palace, a small town in the city built of fine white stone that creates a striking contrast with the colour of the sea.  At sunset, Split becomes the queen of the night, with a wide choice of pubs, clubs and discos where you can go wild until late. Visiting Split by boat means you can simply anchor by its marina and enjoy a stroll through its narrow quaint old centre alleys without stressing about where to park. Or you can just as well enjoy it from the harbour, anchoring nearby. 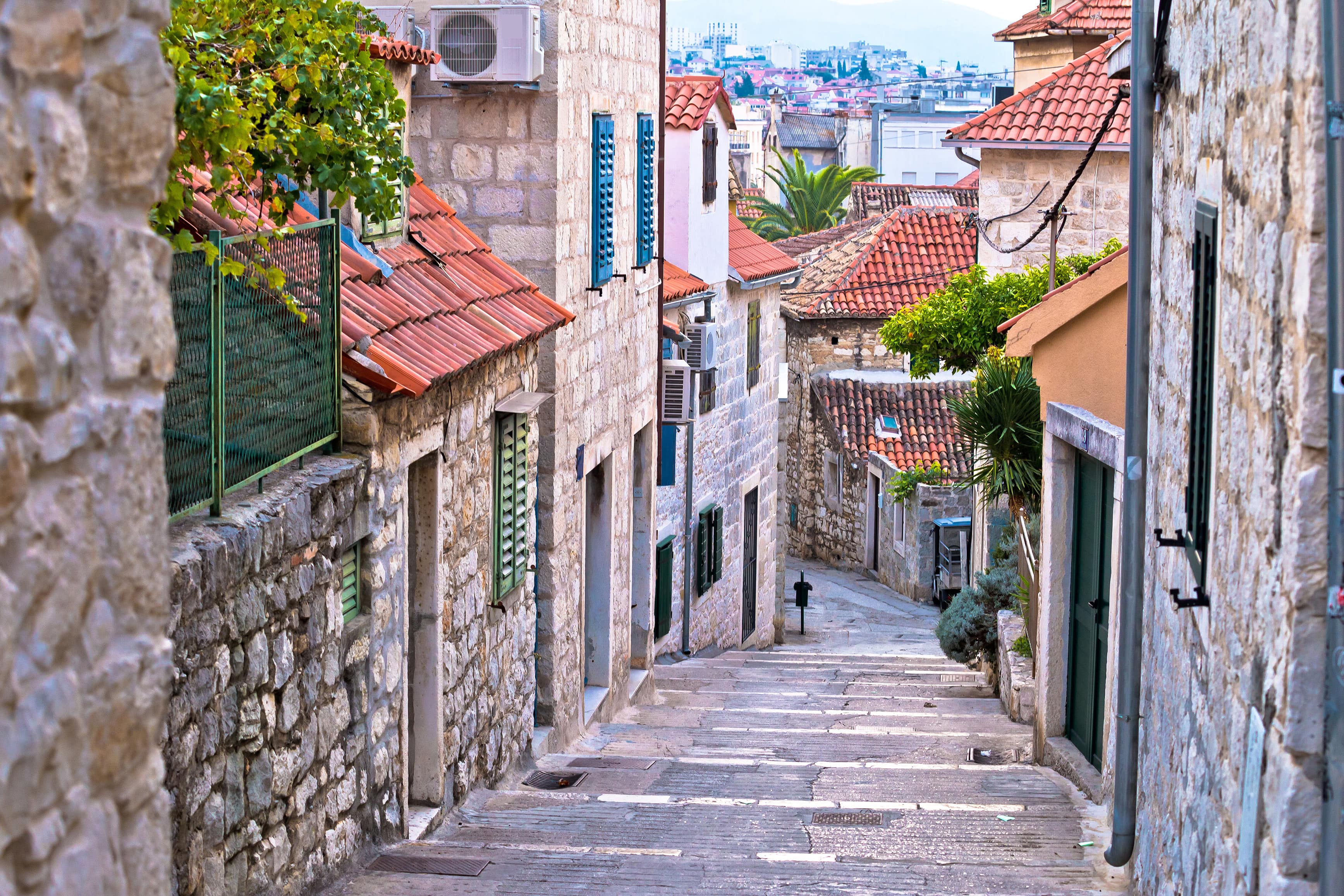 Up and down the little alleys of Split old city centre

Almost untouched, Solta is perfect for those who want to relax and immerse themselves in nature. With its crystal waters, the island is famous for its protected species such as the Mediterranean monk seal, which only reaches the cleanest waters and, if you are lucky, it is not difficult to spot groups of dolphins. The island is famous for its extra virgin olive oil and its wild rosemary flower honey, considered one of the best honey in the world. 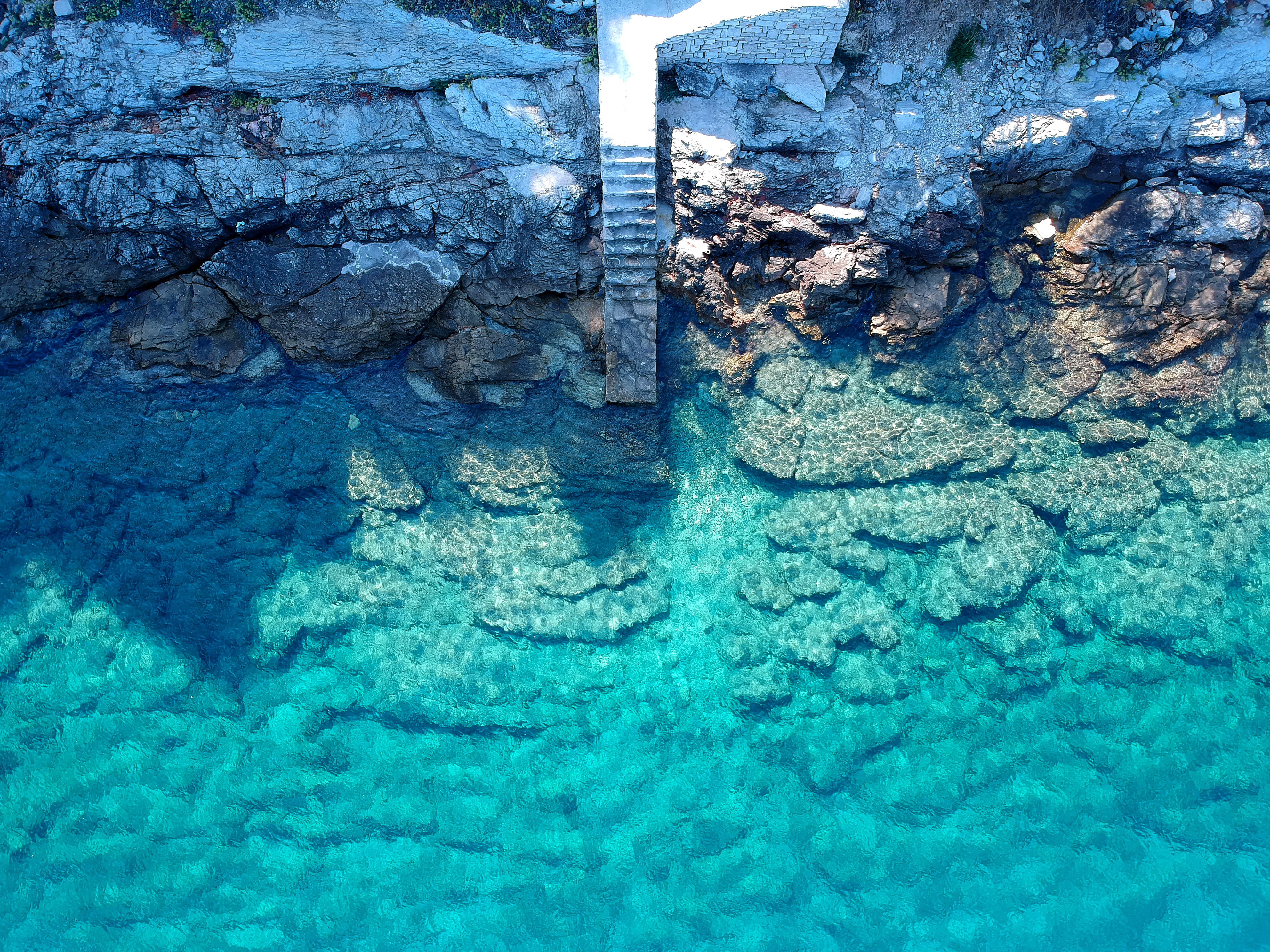 The crystalline waters by the Island of Solta

On the island of Hvar, you won't get bored. Every day you can choose from an extensive list of alternatives, from visiting the old town of one of the many beautiful places that the island has or spend the day between sun and sea. The most famous tourist resort is Palmižana. On the south side of the island, there is the bay of Vinogradišće, surrounded by dense pine forests, which immediately fascinates with its scent of heather, rosemary and many other exotic plants. 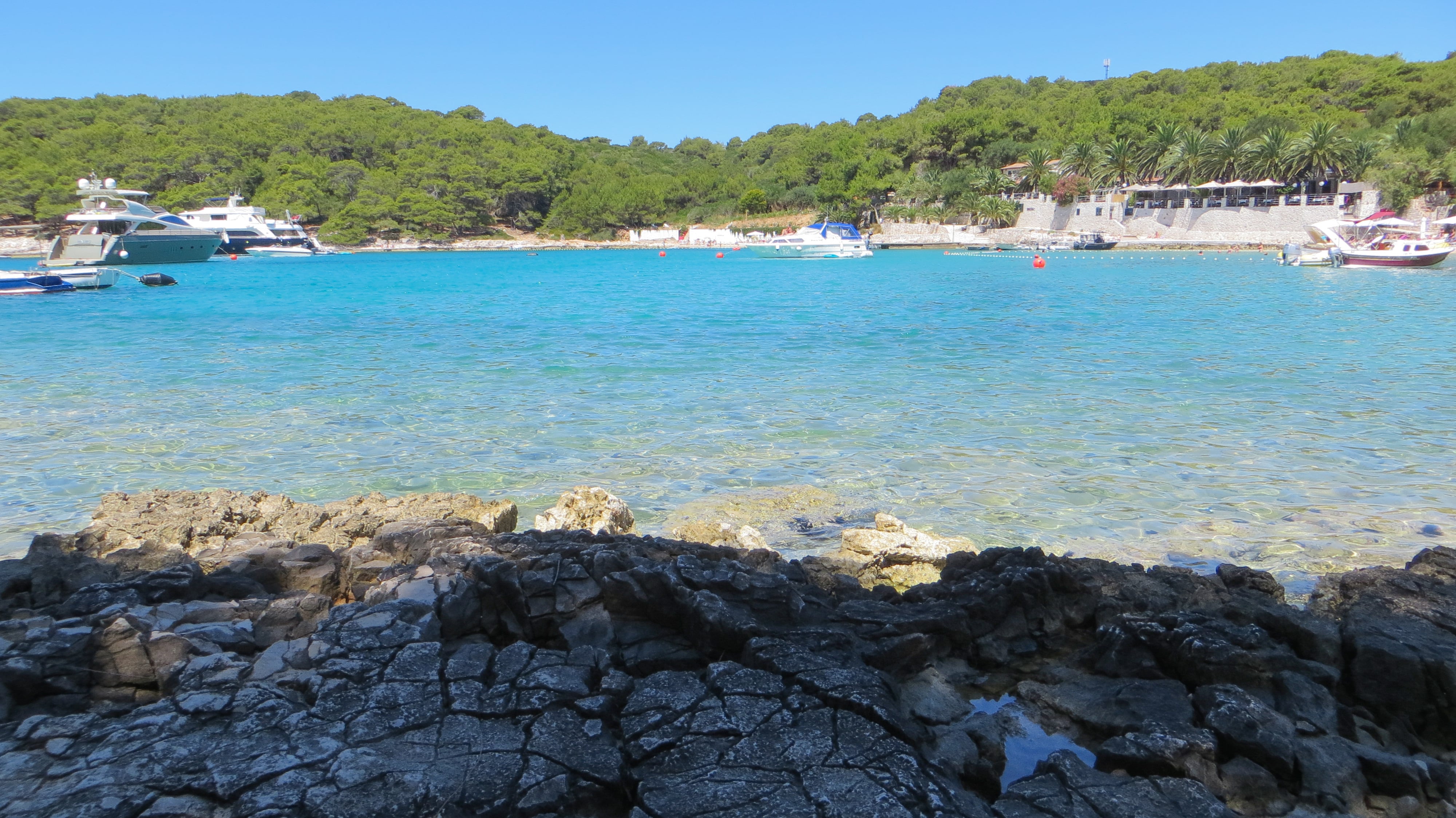 The Vingradisce Lagoon of Palmizana on Saint Klement island

Located in the deep bay on the western shore of the island of Vis, Komiza is a typical Mediterranean town, with narrow streets and houses next to the port. If you are interested in culture and entertainment, don't miss out the events of the Komiza Cultural Summer, when the taverns play the songs of klapa. The port of Komiza protects from the northern and eastern winds, while it is completely open towards the north-west. 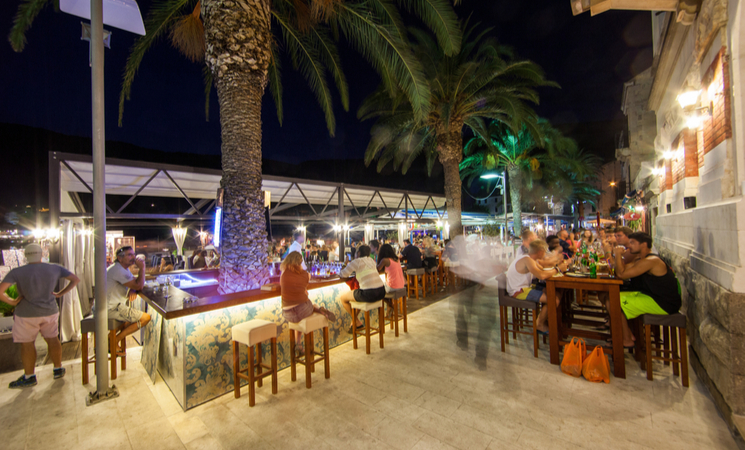 On the east coast of the island of Drvenik lies the beautiful Krknjasi lagoon, protected by the two islands Krknjasi Large and Small.
Here you will find small pebble beaches overlooking a shallow sea, while along the coast there are several small bays.  The bay is easily accessible by boat.  In Krknjasi there is also one of the most famous restaurants in Dalmatia, "The Communists", which offers dishes based on fresh fish cooked according to tradition. 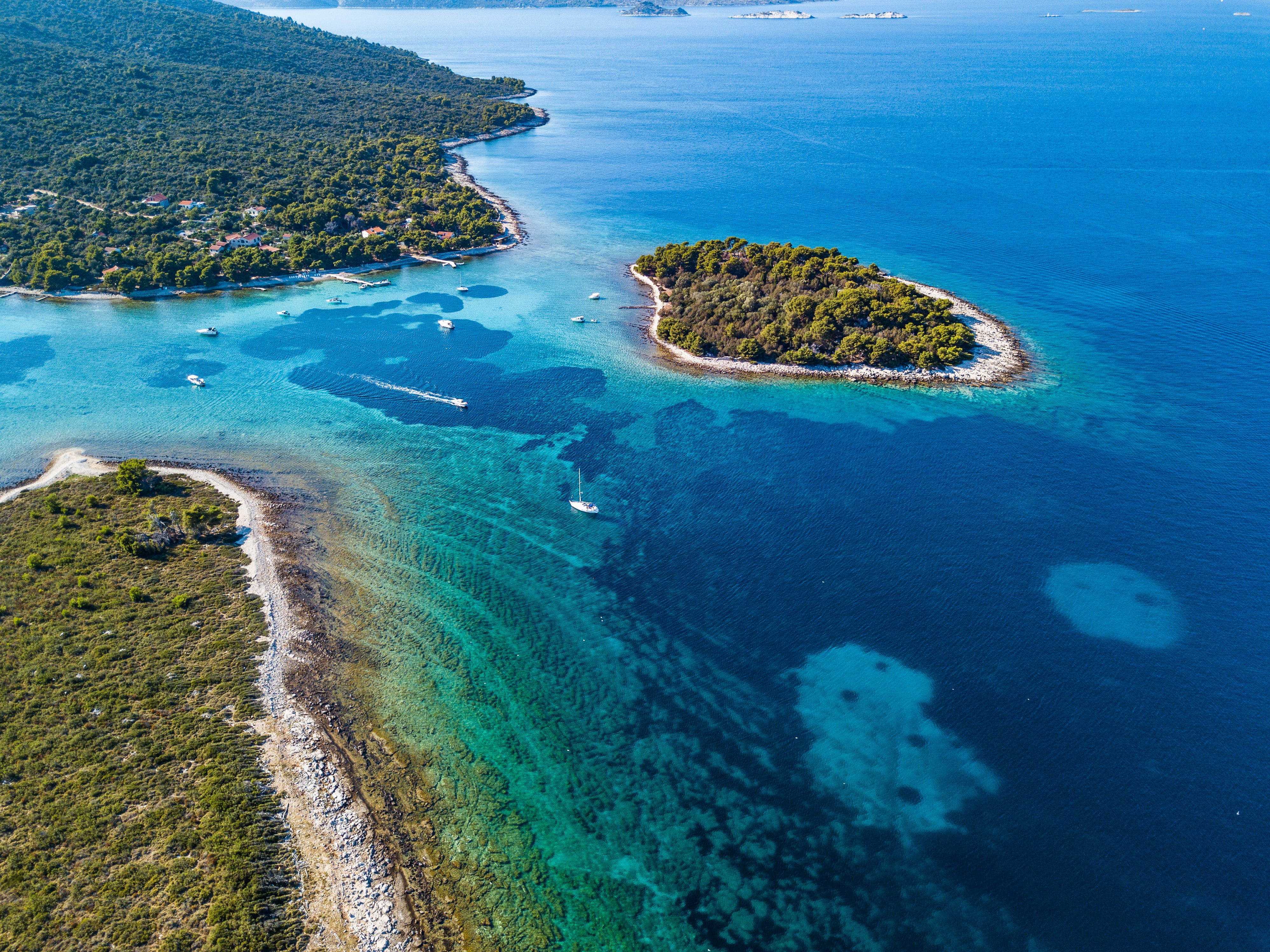 Ariel view of the popular Blue Lagoon near Krknjasi

Primosten means "connected by the bridge", in fact, it is an islet anchored to the coast. Many arrive in Primosten by sea, welcomed by a charming marina, not far from the centre; just after the docking, you can immerse yourself in the typical Mediterranean atmosphere.  In summer there are many festivities, starting with the Klape, the Dalmatian Song Festival, which takes place on July 26, while in August there is the dance festival and the feast of August 15.

A harmonious fusion of blue and green dominates the landscape of Rogoznica. Those arriving by sea are welcomed at Marina Frapa, one of the safest ports on the Adriatic. Here, since ancient times, fishermen sail in the morning and return at sunset, loaded with fresh fish. Among the oldest monuments to visit are the remains of the ancient fortress of Rogoznica. Not to be missed, finally, is the local market, which offers local specialities. 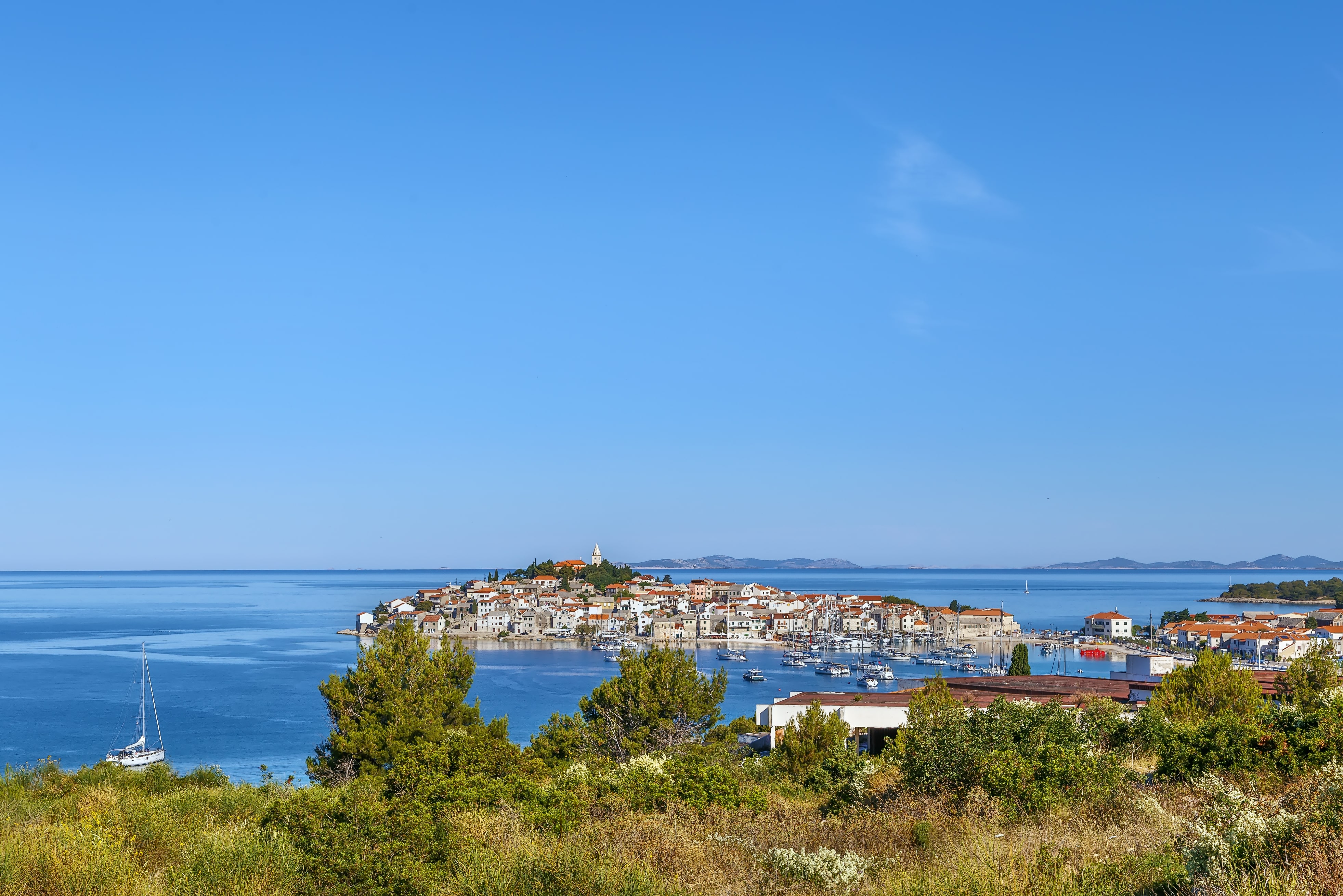 View of Rogoznica historical town on a peninsula in the sea, Croatia

Today we meet Ante, the base manager from charter company Euronautics in Biograd na Moru, Croatia, about 60 miles from Zadac.

The location of this base is perfect to reach various islands and national parks that are absolutely worth a visit. You can easily reach them by boat or catamaran if you're traveling around there.

"Within 20 miles from here you’ll find two national parks: the Kornati National Park and the other one is Park of Nature Telašćica. The other national park is KrKa National Park. About 30  miles from Biograd, you get there through narrow cliffs and it’s wonderful to see. You can get to Skraden by boat or foot to see the beautiful waterfalls. You can walk around and see the local cuisine."

Watch Ante's full video with tips and recommendations on sailing in this area.